The Ridge of Capard Trailhead is the starting point for 3 waymarked circular trails.

There is something here for everyone. The Viewing Platform Route (Green) which is just 300 metres will reward you with a stunning panoramic view for very little effort. The Capard Route (Blue 2km) follows a specially designed boardwalk route which is a particular favourite with children while the Glenbarrow Route (Purple 4km) stretches further afield and takes you through Cones deserted village.

Please stick to the boardwalk, where present, and follow signage. Dogs should be kept under tight control.

The Long Distance Slieve Bloom Way also passes through this point. Those wishing to reach the Stony Man can do so by following the Slieve Bloom Way (via the boardwalk) for 2 km. Note that this is not a specifically waymarked looped walk.

There is a car park with picnic facilities at the trailhead.

Note that the 2 of 3 walks starting from Glenbarrow Trailhead also pass through the Ridge of Capard (with the third walk passing very close by).

The Slieve Bloom Nature Reserve is managed by the National Parks and Wildlife Service. At over 2,300 hectares, it is Ireland’s largest state-owned nature reserve. It was established in 1985, so that it could be managed in such a way as to ensure the conservation of the mountain blanket bog ecosystem. In addition, the nature reserve is designated a Ramsar Wetland Site and a Council of Europe Biogenetic Reserve. Much of the greater upland area has been designated as a Special Area of Conservation (SAC). The primary interest of the SAC is mountain blanket bog. The Slieve Bloom Mountains are also designated a Special Protection Area (SPA), of special conservation interest for the Hen Harrier, a rare bird of prey.

Wildlife walks guided by the local Conservation Ranger and family days take place on the Nature Reserve at Capard different times of the year e.g. during Heritage Week, Biodiversity Week and other dates.

A strictly limited number of places are available to primary schools to study the ecology of the Nature Reserve. Events include; birdwatching, plant identification and pond dipping. Conditions apply regarding class size, bus access and times of the year. Phone the NPWS North Eastern Regional Office for details (076 1002 589)

Also on the ridge is a stone cairn known locally as ‘The Stony Man” which was built during the time that quarrying was carried out in the area. Some claim that the Stony Man is the finest viewing point in the centre of Ireland; on a clear day you can see at least six counties from there.

The Stony Man is located approx 2km from the Capard trailhed but it is not on a specific waymarked looped route. It can be reached by heading up the boardwalk and following the Slieve Bloom Way which is shown by the yellow walking man symbol. There is no looped option which means that the return leg is back along the same route.

Be prepared for difficult and often wet terrain on this route.

Close by the Ridge of Capard is the old ruined village known as “Cones”. Once home to fifteen families and self sufficient with it’s own mill on the River Barrow, the last family left the area in the 1960s. While the surrounding area has since been planted with trees, the remains of the houses and boundary walls are still intact.

The Glenbarrow Route (purple) passes through this “lost village” and a number of old ruined settlements can still be seen including the Clear family home which has a memorial plaque. There is also an intact animal pound.

There are car parking facilities plus picnic tables at the Capard trailhead. Capard can be accessed from Clonaslee or Rosenallis from the north and from Mountrath or Ballyfin to the south. 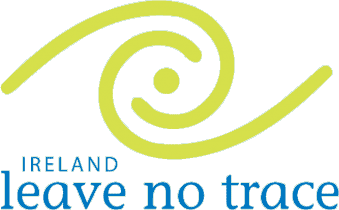 We request that all visitors to this sensitive area observe the principles of Leave No Trace.